[This article is about my early business career: back in the 1980s…]

Superior Software was a publisher of games and utilities for the BBC Micro and other home computers, based in Leeds, England, owned and run by Richard Hanson.

Back in about 1984, when I was 24, I was working as Marketing Assistant at a rival publisher called Micro Power/Program Power, based in the same town, and less than half a mile away. I had been there 18 months and was ready to move on.

I chatted a few times with Richard, then bumped into him one day while out shopping. Sales weren’t going well. We were both into music, so he suggested we set up a shop in Leeds selling LPs and singles (this was before the days of CDs!). I wasn’t interested, but I was interested in setting up a record label to promote local bands. Richard thought that sounded great, so we discussed setting that up.

I said I also might be able to help him with Superior Software. He didn’t think I’d be able to do much as he showed me a graph showing how he predicted sales would go down and down over the coming months.

I left Micro Power, joined Richard in his Superior offices, he provided me with a company car, I came up with the name Cryptic Records. Richard and I became co-directors. More about Cryptic Records here.

On the Superior Software side, one day we received a game in the post called Repton from a 15-year-old teenager called Tim Tyler, which he had written in a month.

(Micro Power had turned the game down as it was so similar to Boulder Dash and didn’t want to have copyright issues I guess, so Tim then sent it to us as the second most prominent games publisher for the BBC Micro.)

I suggested that the game needed a password system so players could skip earlier levels of the game as they progressed through the levels, rather than starting from the very beginning each time they played. This feature was incorporated.

I didn’t like Superior’s packaging designs and artwork at all, so I brought in graphic designer Mike Ellis who I’d used at Micro Power, and I sketched out my ideas for the inlay card. The idea was to show very clearly the similarity to Boulder Dash so it would be picked up quickly in computer shops and purchased. This what Mike came up with…

We launched the game in the summer of 1985, and I wrote this ad for it…

The game was a terrific success. Later I tweaked the company logo, rounding out the harsh edges to the SS, and giving it a little depth, without altering it too much…

Repton 2, released in November 1985, was a great success too. Here’s the full-page ad I created for it. I used to sit in bed at night browsing through books of typefaces (!) and advert designs – and came across a newish typeface called Dave, so I asked Mike Ellis to use it for the strap line at the top of this ad…

As I had my Atari 400, I had some games which had level designers built in. This was a new idea at the time. So when Richard and I talked about creating Repton 3, I encouraged him to include a level designer. Repton 3 was released a year after Repton 2 in November 1986.

Eventually the Repton range sold 125,000 units which was an amazing success for that time in the early days of the computer games industry.

(Early in 2010 Richard Hanson sent me a development copy of iRepton for the iPhone to get my feedback, and I really enjoyed writing up my comments for that.)

While at Superior I was also involved in the marketing of other titles, like this one, Deathstar, with lovely artwork from Mike Ellis and his team…

He saw it being sold on a chip which would be slotting inside the computer once you’d unscrewed the lid. He had offered the speech synthesiser to Micro Power, but they had turned it down.

So he was contacting me at Superior to see if we were interested. I said we could do well with it if we simply sold it as a software program that people loaded from tape and floppy disc into RAM, as I knew the popular program for the Atari 400/800 called S.A.M.: Software Automatic Mouth.

Speech! took up 7k (!) of memory, so on a 32k BBC Micro there was plenty of room left for a program that would use it.

I came up with some ideas for simple programs which would show off what you could do with it, such as a simple spelling program for children.

Richard wrote one or 2 of the programs.

I decided to keep the name of the package simple: Speech! with an exclamation mark on the end.

For the packaging I drew a sketch of a genie coming out of the computer with a jaggedy speech bubble saying “Speech!”, gave this to Mike Ellis and he came up with some great artwork.

In hindsight it probably would have been more successful if I’d come up with a cleverer name.

Richard or I came up with the idea to include some speech created using this program in our upcoming games, Citadel and Repton 2 to help promote sales of Speech!

This article says the following about it…

“Speech! from Superior Software was such a ground-breaking piece of software, that it is difficult to overestimate the impression that it made. It was featured on television programs – for instance Micro Live presenter Fred Harris demonstrated it on the BBC 1 Saturday morning children’s show “Saturday Superstore”. And it also starred on records – most famously on Roger Water’s (ex-Pink Floyd) solo LP “Radio Chaos”. “Radio Chaos” was a concept album about someone that creates a computerised voice (a person receives a credit for operating a Master 128 on the sleeve!).”

(Around September 1991, a few years after I left Superior, Speech was launched for the Acorn Archimedes computer.)

I also enjoyed handling the artwork and advertising for the next release, Citadel…

Can You Write Games?

I had the idea to create a advert to encourage programmers to send their games to us – and make us their first choice, rather than Micro Power which was our biggest competitor.

So I wrote a full-page colour ad headed Can You Write Games? and explained how much money Repton and other games had made for their young programmers.

At the end I told readers to write in for a booklet on writing games and how to get published by us, which I wrote, and Richard added to… 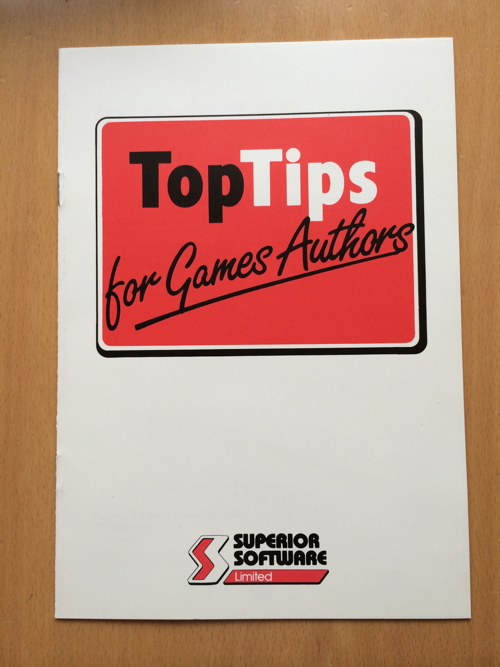 I really enjoyed working with Richard: he ran a solid business very prudently and wisely.

In researching this article I found this extract from an interview with him:

“Chris Payne worked with me as a Marketing Manager, and his knowledge of marketing – he has a degree in the subject – assisted Superior Software to grow rapidly from a small company to a much larger one. In terms of the company’s financial progress, his knowledge was an enormous contribution.”

That’s very kind, though I was less than 2 years out of college, so I was very green marketing-wise at the time.

It took me another 15 years before I felt I had a good grounding in marketing!

After working at Superior Software for 18 months, the same length of time I was at Micro Power, I was offered a job at Europress, and took it….

Next: Working at Europress / Database Software / Mandarin Software Previous: Working at Micro Power / Program Power, Leeds You can contact me about this page here.