In the early 1980s I was very friendly with a guy called Dave Carlos. He lived in Leeds, and I think we got to be friends through him visiting the showroom at Micro Power where I first worked after I graduated.

He was a teacher who was passionate about the new home computers which were emerging, especially the BBC Micro, and wrote articles and reviews for the monthly magazine called The Micro User which was dedicated to the BBC Micro. He got offered the editor’s job at a weekly magazine called Home Computer Weekly.

While I was at Superior I was really dissatisfied with the amount of time it took for The Micro User to review our latest games. We were an important advertiser, taking up to 3 full-colour pages, including the back cover, in that magazine. I complained to one of the ad managers, John Snowden, and he suggested I write to the Chairman, Derek Meakin (right).

So I did. I think Derek decided, on reading that letter, that he needed a full-time Reviews Editor to handle the reviews across his 8 major home computing titles, so he spoke to Dave Carlos and asked him if he knew anyone. Dave suggested me!

This was 1986 when I was 26, so Derek rang my home number. I had an answering machine in the days when virtually no-one had them: they were a novelty. Mine cost me about £70 and came with a 20-second cassette tape loop and another cassette for storing messages. Derek got my answering machine with a very silly message on it: with a high-pitched voice I sing songed, “Bonjour, zis is Ghisalaine, ze au pair girl of Christophe Payne [pronounced ‘pen’]. Chris eez out right now, so please leave a massage (sic) after ze tone.” …to which Derek responded in excellent French. (His wife, Lucie, is Swiss.) My zaniness didn’t put him off calling me in for an interview, thankfully.

I drove over one weekend to meet him, and he offered me a salary which was nearly 50% more than I was earning at Superior Software. And he said his company would buy the company car I was driving off Richard, the Managing Director of Superior

I started soon after, and Derek installed me in his office, facing him. Derek’s decision to employ me upset some of the other editorial staff. One guy was especially rude. Mike Cowley (right), a lovely guy who was the News Editor, said that Derek had given me the ‘golden cap’ as he often gave new recruits, but, he warned, it wouldn’t last. (Amazingly it did: Derek and I got on famously for the next 7 years.)

(As an aside, it was through Mike that I got to meet and chat briefly with Steve Wozniak, the co-founder with Steve Jobs of Apple, Inc, and also Douglas Adams, author of the best-selling book The Hitchhiker’s Guide To The Galaxy: we talked about CD-ROM drives and how we felt they would revolutionise software for computers. Both events happened at a book fair in London.)

Anyway, the editorial team would all go out for lunch to a local pub every day – but they wouldn’t invite me. About 6 weeks later, Alan McLachlan, the senior editor of the team, invited me along, and we all got on much better after that.

Derek was a dynamo: he was full of enthusiasm and ideas. But he was temperamental, and could get annoyed and overwhelmed. He drove the staff potty with his last-minute changes to copy and his perfectionism. He was incredibly untidy. His desk was buried under enormous piles of paper, with the top layer looking as if someone had poured a bag of sheets onto the top of it, so the pile was curved. His chair was piled with papers too – so he sat on them to work. And papers covered the floor all around him.

He was so messy that I brought in my camera and took a photo of him with his desk piled high with paper. He was embarrassed, but willing to pose. The photo is long lost now.

Derek and I shared the same birthday: August 28. We worked very well together. He used to bring me into a lot of his meetings and ask for my input. This so annoyed some of the other staff.

I was completely devoted to him. I’d get to the office at 8am, and stay until 7pm, often working through lunch, buying a sandwich from the newsagent across the road to keep me going.

When he’d get overwhelmed he’d get me to stop what I was doing and take over writing headlines and subheadings.

Every month each magazine would feature special offers: software and hardware that Derek’s son and Managing Director Meash Meakin would source himself or with his colleagues. One or 2 days before each magazine would go off to the printers, or even the very morning the artwork was due to go off, Meash or someone else would bring me a new product and ask me to write the promotional copy for it, so I would drop what I was doing and write something. I’d pass my words to Derek and he would cross out most of what I’d written and re-write them with his red pen then add his swirly ‘D’ signature.

Over time I’d get better at writing compelling sales copy and he would change little of what I wrote until, eventually he’d mock scold me for bringing text, saying “Why are you bringing me this? Your copy is SO good!” (My copy was better, but it wasn’t that great: he was flattering me, but I appreciated his encouragement.)

Boy, am I so grateful for his training. I really learned how to write well, and fast, with his patient guidance.

Derek would sometimes take me for lunch to a local pub and we’d dream up ideas for magazine covers and special offers. One of the editors I worked with was called Robin. A while back he emailed me some scans of the covers we created. Here’s one that Derek and I came up with. This one from Atari ST User has me on the front cover wearing the jacket I bought to go on a weekend ski trip with some mates, plus the goggles I bought for that trip. I still had the UVA/B lipstick so that went on, and I borrowed ski sticks from a friend from college called Pete Godfrey. Steve Leigh who had a photographic studio in Bollington which was 15 minutes away from Europress, took the shot while someone poured fake snow over me… 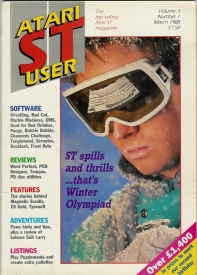 Here’s another cover from Atari ST User. Note the Casio calculator watch which I was so proud of at the time… 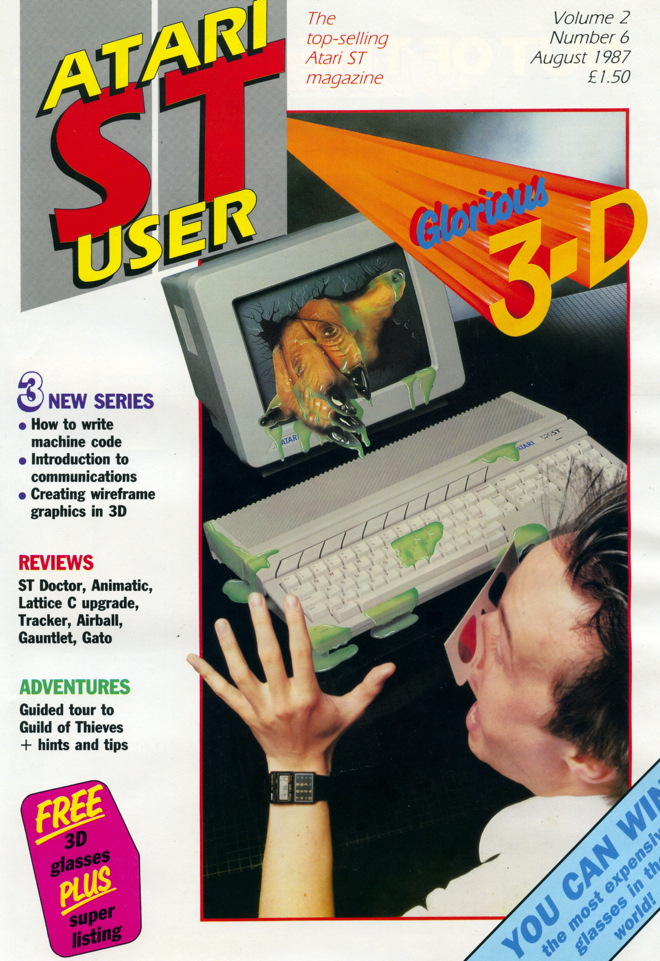 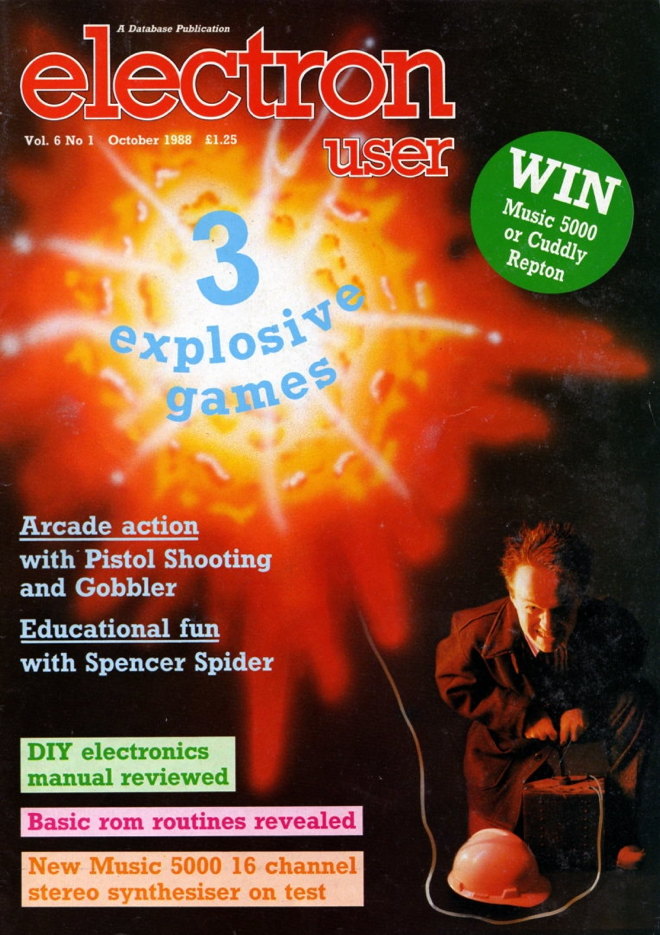 Derek launched a video magazine called Video Action, and used me in one of the issues. This shot is from the brochure I designed and wrote to see the advertising space…

When we did a promotion for a new product Derek dreamed up called Sound Master, I did a pencil sketch for an artist to show all the sounds that you would hear through the device, and he did the airbrushed illustration. I became the model again…

Derek ensured that everyone worked fast and hard. Some complained that he sucked all the energy out of them like a vampire – but I thought he was great and loved my time working with him.

One morning, while shaving, he had the idea to create a computer magazine for children and call it Let’s Compute. The first issue was put together very quickly and went to the printers just 2 weeks later! This was in the days just before desktop publishing erupted. Here’s the launch ad which shows the cover of the first issue… 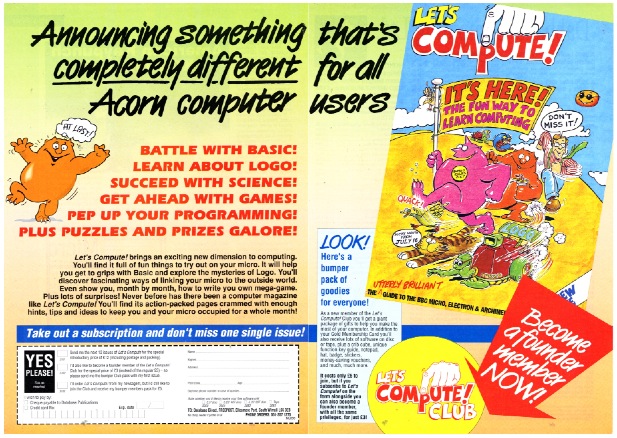 Derek drove everyone to get this magazine out fast, though one or 2 cursed him for his relentless pushing.

One final thing on the magazine side: I got hold of a book called The Blind Watchmaker by Richard Dawkins at the time he did a documentary about evolution on television. I rang him up, we chatted, and he sent me a software program he’d written for the Apple Mac which created Biomorphs: computer-generated organisms that helped Dawkins to show (I think!) that large evolutionary changes can happen over a short period. Roland Waddilove, one of the editorial team, wrote a version of this software for the BBC Micro, he ran an article on it, and a competition to design a unique biomorph of your own. I interviewed Richard for the issue, and blagged 8 copies of the book from the publisher…

Dawkins’ later book, The God Delusion, really put him on the map.

Please log in again. The login page will open in a new tab. After logging in you can close it and return to this page.