Some of the things I have been involved with

He is the creator of The Effort-Free Life System, a set of up to 19 CDs, 1 DVD and a 70-page playbook which has sold thousands of sets around the world at a price between US$297 and US$1,497, generating more than $3m in revenue…

* run seminars on personal development in the UK, USA and Australia (with more photos here)…

* presented at marketing conferences in the UK, US and Australia, including this shot from a conference run by US marketeer Dan Kennedy…

* presented at 2 TEDx conferences: one in Abu Dhabi (850 attended), and also TEDxIslingtonWomen in London

* run associated teleconference calls with as many as 300 people on the line.

* spoken via a video link in the UK to hundreds of people in a seminar in Melbourne, Australia

* had 300,000 copies of an interview with him called How to feel happy and free right now mailed around the UK.

Mark Giles writes, “I must have listened to your interview “How to feel happy and free right now” over 50 times, and I seem to gain something from it with every play. You hint at so much more, and I can well imagine what can be achieved. I then searched for you via Google, and found your site. I enjoyed looking through the various products, and I loved your family pictures.”

* produced 45 monthly issues of the Effort-Free Life Newsletter, each issue consisting of 12 A4 pages, mostly written by Chris, sold on subscription to people around the world…

* been one of 6 people interviewed for a CD set called Mind Power University, created by Stephen Pierce, a respected internet marketing coach…

* been a director of The Vegetarian Society of the UK

* received US$308,000 in training by way of books, seminars, CD sets, and coaching programmes in the area of personal development, marketing and more

What Chris does now

1. Having, in some years, sold million of dollars of his own and other people’s products, and mailed up to one million sales letters in a single year, for a small proportion of his time Chris coaches people on turning their knowledge into paperback books (self publishing on Amazon), Kindle ebooks, video programmes, webinars, CDs, seminars etc, with the aim to create a part-time or full-time income – even if they don’t know what their expertise is. Some of the people who approach Chris have already had considerable success with marketing products but simply want to move to the next level.

[Above is a Photoshopped image to show what Chris’s personal library would look like if all his bookcases were all in a row: there are more than 1,300 books and courses in 13 bookcases in his library, and nearly all of them are on personal change. Click on the image to see more detail.]

He has been involved with 209 book projects, including 22 books he has created of his own. Here’s a photo of Chris with some of these books… 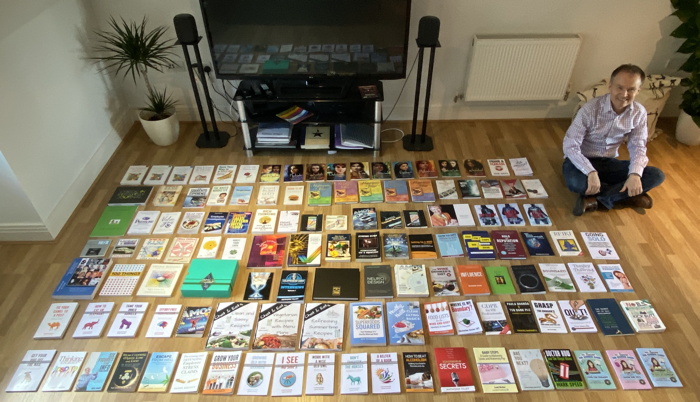 2. He also teaches people how to make money – or more money – as a life coach/facilitator – often if they’ve done professional training but have conducted no or few coaching sessions themselves so far. Some want a website building like the one you’re looking at now.

3. Creating new products to sell to his email lists and also via joint venture partners. For example, his Amazon Profits online course has hundreds of members who each paid $997.

Contact Chris via the Contact Me tab on the nav bar at the top of the browser window.

People Chris respects (who you may have heard of)

Some of the challenges Chris has faced