“Guru of calm” Paul Wilson has sold 10 million books as a result of the phenomenal success of The Little Book Of Calm.

A friend of mine, Howard Tinker, suggested I license Paul’s brand – so I met with Paul at his offices in Sydney, Australia, and soon after we signed up together.

My business sold 15,000 ‘light and sound’ devices in the UK by mail order, mostly at £250 ($400) each, and almost all of these were manufactured by an American business run by a wonderful man called Robert Austin who became a very dear friend.

With Robert we rebranded one of the light and sound devices he had designed, and I made an order for a shipment of units from him. Several months later I launched The Little Calm Machine.

It came with some specially-written exercises from Paul (see photo of him with me above), and a CD he created for the package called Guided Journeys Into Calm.

I wrote all the copy as usual, and worked with my graphic designer, Wendy Barratt. She did a great job, as always.

Here is the front of the box, and 2 of the sides… 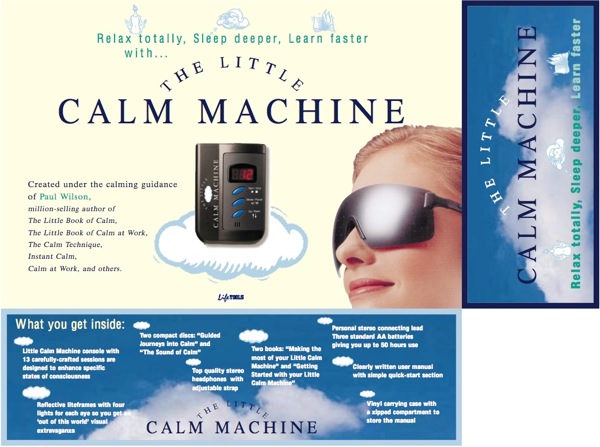 And here’s the back and 2 more sides…

We got lots of publicity on the national press as we were using Paul’s brand.

Paul is a marketing guy. After he wrote The Little Book Of Calm, he had the idea to create a counter-top box to contain this book, and to be placed next to the till in bookshops. His book publisher wasn’t interested so he created the display box himself, had it printed, and got bookshops to take the box of books and put it on the counters, next to the tills. The strategy worked, and sales took off.

You can see a video of me promoting The Little Calm Machine on Channel 5 Breakfast News.

We got lots of national and local press too, including the following…

The Daily Mail, one of the United Kingdom’s biggest-selling newspapers, devoted more than half a page to the Little Calm Machine. The journalists gave the device to 3 of their readers who gave their very positive feedback about the device.

The Sunday Times wrote… “This device’s gently pulsing lights and thythmic sounds lull you into a state of deep calm.”

And The Financial Times interviewed Paul Wilson, who is quoted saying, “[The Little Calm Machine] served three functions. It would help the hard-pressed executive get over jet lag. It would assist those managers who can never relax. And it would be just great for strategic planners.”