Case study: packaging and marketing for the Alpha-Stim SCS

A number of years ago I was having dinner in London with Dr Dan Kirsch and his wife Tracey.

Dan runs Electromedical Products International, Inc, and had designed a very successful pain-relief device called the Alpha-Stim 2000 which sold for US$5,850.

Now, with the advances in microelectronics, he was selling the Alph-Stim 100 for around $695 on prescription only via medical practitioners around the world.

It works by sending micro-currents through and around the area where the pain is.

The 3 of us were talking about my company marketing his products in the UK and also acting as the warehousing and distribution centre for his European operation.

Dan was planning to launch a compact version of the Alpha-Stim 100, to be called the Alpha-Stim SCS, where SCS stood for Stress Control System. This device would focus on reducing anxiety and helping people to sleep better.

He showed me the mockup of the handheld console and the graphics he planned to put the unit.

I wasn’t keen on the graphics and recommended that, rather than sell the device in a plain box or case, he box it in a large full-colour, cardboard case.

While we waited for our dinner to appear, I sketched out what the box would look like on a pad I had with me – and showed an idea of a 1 – 2 – 3 step process in the box front to show how to use the product.

I added the text ‘FREE leather case inside’ as it’s always preferable to mention something that’s included for free, and potential buyers get to see this emphasised as so many devices don’t come with a storage case.

Dan and Tracey were happy with my ideas so, when I got to the office the next day I drew this up more carefully and then passed it to my graphic designer, Wendy Barrett.

She did a mockup of my sketch and then from there went on to final artwork.

This is the artwork she did for the console…

You can see the image of a person looking sad with a dark cloud over their head, then 20 minutes passing and them feeling bright as a button (pun intended).

I contacted a local model agency I had used before. I went through their catalogue and selected an attractive young woman to appear on the box artwork and the brochure, and I organised a photo shoot with a professional photographer I’d used for years.

I created the box and the colour brochure using QuarkXpress, a top-end DTP (Desktop Publishing) program on my Mac.

Not long after that the product was in production and I got my first samples.

This is what the front of the box looked like… 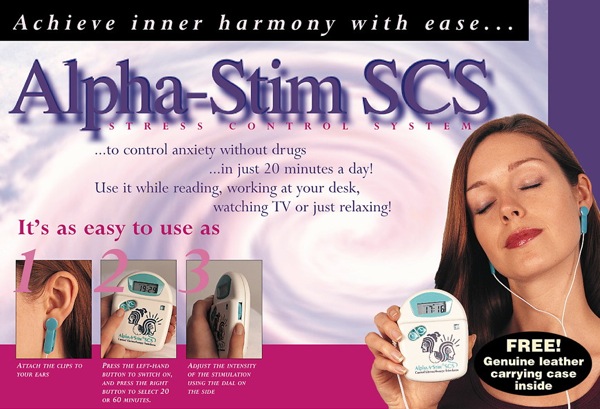 You can see how I used the copy “It’s as easy to use as” and then had 3 images to show the SCS in use (rather than just showing the parts with no human elements), including having the index finger reaching for the On button in photo 2, and the thumb near the intensity button in photo 3.

You’ll see that there’s a small bottle of liquid in the photo above. The ear clips need to be moistened with salty water before applying to your ear lobes to ensure a great connection.

Dan never used to supply this salty water with his products: people used to have to create it themselves by putting salt in the bottom of a glass, adding water then dipping the clips into it!

I had told Dan that everything necessary needed to be in the box, including the salty water, so he created that bottle. And now sells replacement bottles, Alpha Conducting Solution™ Refill, for US$24.

I wrote all the sales copy, we mailed 10,000 letters at a time over several months, and we ended up selling thousands of this device in the UK by mail order.

I also got my marketing manager working to get some great coverage from the national press – and this led to a number of stories being published, including this full-page article in the Daily Mail which sold about 2 million copies a day at the time… 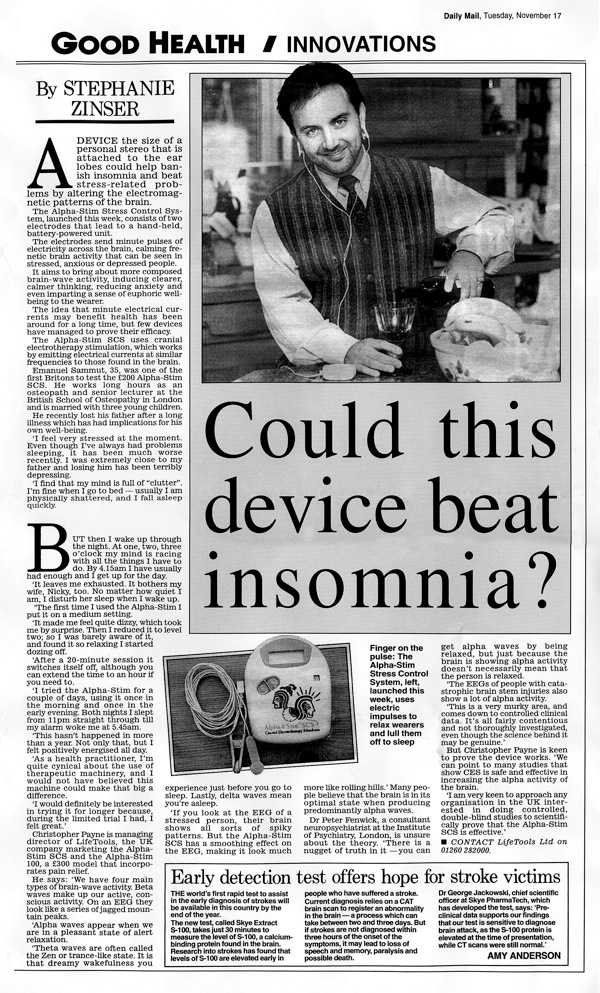 As my business was also promoting the Alpha-Stim 100, I wanted to give this a more professional look. This was the cover of the manual…

…and I wasn’t so keen on the photo: it looked amateurish.

So at the same time as I hired the female model, I selected a suitable male model too to play the role of a doctor with the female patient.

I managed to borrow a white lab overcoat and stethoscope from a friend of mine for the day.

These are some of the photographs we had taken. I made sure to have a photo of most uses people would put to the pain relief device… 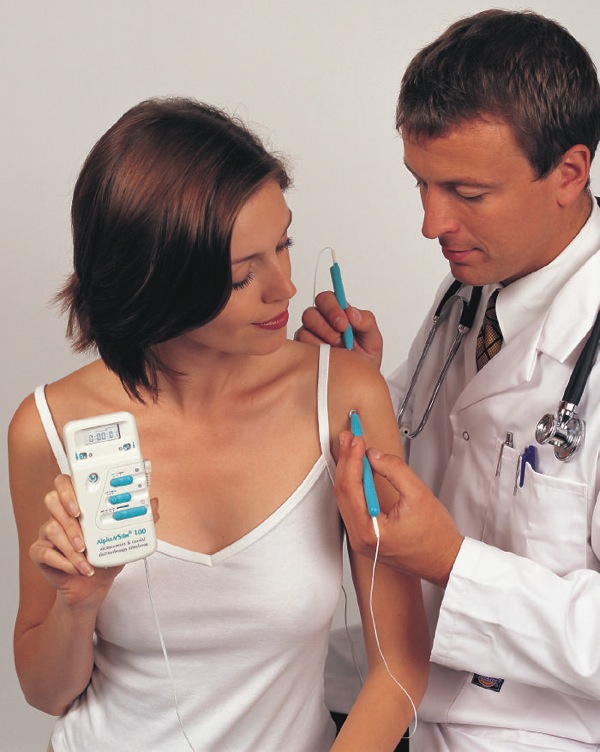 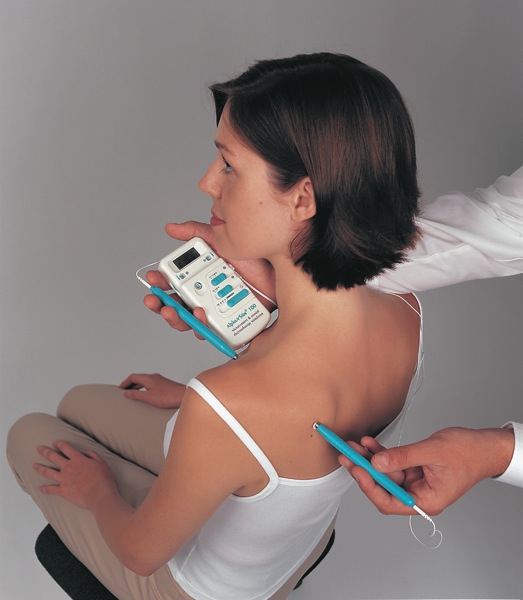 I also set up several close-up shots. Here are 2 of them, one to reduce pain in an arm…

…and another to reduce pain in the lower back…

When you have photos as well set up as this the expression “a picture is worth a thousand words” rings true: looking at those photos, isn’t it clear to you how the probes are placed either side of the pain so the current goes through the shoulder etc? And you probably get a sense that the treatment is painless and takes a short time too.

Note: The Alpha-Stim 100 and SCS have now been superseded by the Alpha-Stim AID and M. Go here for more information.